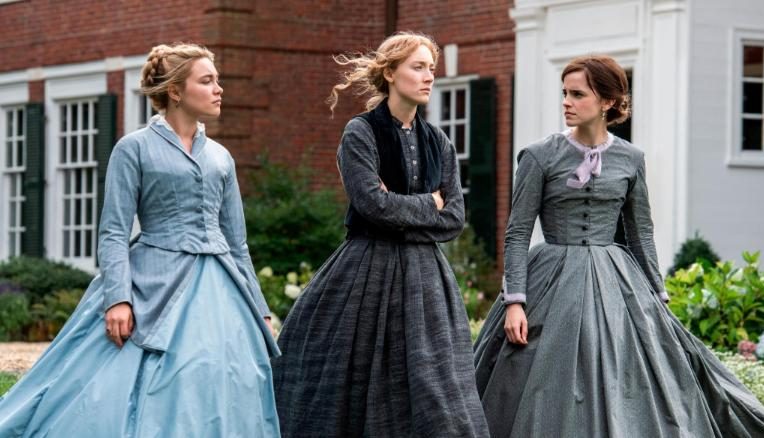 In December, the faculty of the Film Studies program put together its top films of the decade. While the list was rather diverse in terms of genre and country of origin, it notably lacked in one area—films made by women. Since 1929, only one woman (Kathryn Bigelow) has ever won an Academy award for Best Director. In 2019, no women were even nominated, which many have read as a major snub to Greta Gerwig, whose adaptation of the feminist classic Little Women was nominated for six other Oscars. Prof. Cristina Ortiz writes our guest blog on why you should be watching Little Women.

Recently I had a lively discussion with two colleagues about the importance of the elements that need to be considered when evaluating a work of art. I argued that the “how” (style/formal elements) should be most relevant, and, while significant, the “what” (theme) or the “who” (author) are to be considered of lesser significance. However, Greta Gerwig’s Little Women shows how, in reality, these three elements are entangled, and they powerfully inform each other. In fact, this might be the center-theme of her adaptation of Louisa May Alcott’s work. In her rendering, Gerwig offers not only an intelligent retelling of the classic story of the March’s sisters and their lives in turn-of-the century New England during the American Civil War, but she also invites us to reflect on many aspects involved in the creative process. Among other things, this film makes us consider the social context in which a work of art is produced and how it is (or it isn’t) recognized, the particular bias people must face in the pursuit of their life’s aspirations, and the dilemmas individuals must confront to honor a life committed to art and creation. In her adaption of Alcott’s work, Gerwig is aware that she has to remain faithful to well-known moments of the original story yet, at the same time, she needs to retell this 19th century classic with a 21st century aesthetic language. To achieve this goal, the director moves away from following a linear narrative and, instead, the film zigzags back and forth between past and present, placing its logic on the emotional intensity of the scenes rather than on a chronological development. In her review of the film, “How Greta Gerwig Built her Little Women” for the New York Times, Amanda Hess points to how the scenes are constructed alluding to pictorial, cinematic and literary references. From the poetry of Emily Dickinson, to Martin Scorsese’s “The Age of Innocence” or the paintings of Winslow Homer, among others. The director uses multiple artistic references as inspiration to reconstruct the world that Jo (Saoirse Ronan, who has been nominated for an Academy Award as Best Actress), Meg (Emma Watson), Amy (Florence Pugh) and Beth (Eliza Scanlen) inhabit. While artistically inclined, the March sisters lived at a time where the highest aspiration for a woman was to “marry well,” as Aunt March (Meryl Streep) reminds Amy. Refusing that fate, we watch Jo struggle to assert her artistic voice in a hostile literary environment dominated by men and by their ideas of what a good (marketable) story must be. Unfortunately, Jo’s predicament might not be alien to the director herself. While her film has received the highest accolades from critics (including a 95% rating on Rotten Tomatoes), and audiences have flocked to movie theaters to enjoy it, she did not receive a nomination for Best Director by the Film Academy, nor has any other female director this year. This gesture adds contemporary relevance to the story of the March sisters, so intimately understood by Greta Gerwig and so artistically communicated on this exquisite cinematic piece.

Cristina Ortiz is a Professor of Humanities (Spanish) and Global Studies. She coordinates the Spanish and Latin American Studies program at UW-Green Bay where she teaches courses in Spanish language, and literature and cinema from Spain and Latin America.