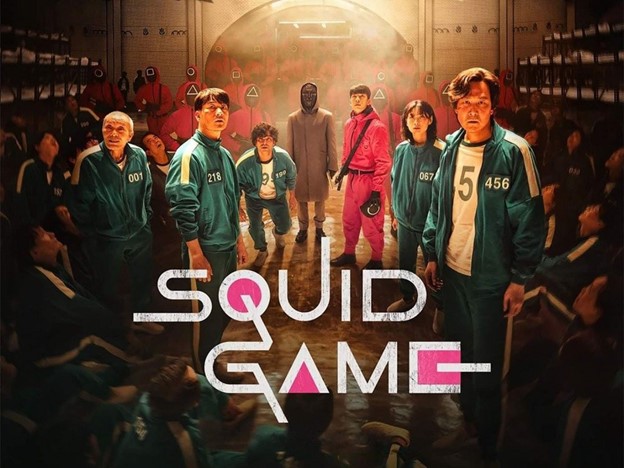 When someone first recommended it, I immediately thought it would be a variation on The Hunger Games. In fact, it has been criticized for borrowing too much from not just The Hunger Games but also Battle Royale and the 2014 Japanese film As the Gods Will. Director Hwang Dong-hyuk has brushed off these criticisms saying every story has something unique to say and this storyline actually has its roots in Greek mythology as well. Someone then said it was more like Parasite, the Best Picture recipient in 2020. Indeed, The Squid Game is both a broader, more universal critique of capitalism but yet decidedly Korean in certain aspects and it combines elements of all of these works.

The premise is quite simple: a group of diverse people, all heavily in debt and down on their luck, are recruited by a mysterious group to take part in a series of survival games, all with the chance of winning an enormous sum of money. The “losers” of each game, however, are eliminated (in this case killed) so that it truly becomes a survival of the fittest. Initially, the participants are sedated and taken to a secret island off the grid and off the coast of Korea, where the organizers of the games all wear alien-like costumes and have no personal interactions with the participants. They then take part in a series of children’s games with deadly consequences. While the participants are free to cancel the games and leave if the majority agrees (and leave empty-handed), they come to realize that they all face miserable prospects and their own demise in the “real” world due to crippling debt were they to leave.

One of the reasons for the success of this and other K-dramas has been emphasis on strong character development. Director Hwang has said that one of the reasons for his decision to focus on children’s games in the competitions is that the rules are easy to understand (unlike in The Hunger Games or Battle Royale). As a result, viewers can focus more on the characters and their personalities and relationships instead of having to pay so much attention to understanding the rules of the game.

The mysterious leader of the organization tauntingly wants the participants to feel that the games are fair and democratic—just deadly to your opponents. In fact, at one point the leader chastises one of his patrol workers saying that he has violated one of the basic rules of the game: equality. In the outside, capitalist world, inequality, and injustice have made it impossible for the participants to succeed—hence their desire to participate and fight to the death for an enormous monetary prize. In the world of the games, however, all have an equal chance with the idea being that life in a capitalist society is rigged and there is not a level playing field. However, in the world of the games, there isn’t actually a level playing field either; some are physically stronger (or weaker), some are cleverer (or more dim-witted) although as the story progresses, we find that each brings some strength to the group to help them survive and get closer to their goal. Thus, the games do not present a communist world of equality, rather an almost atavistic world in which each must be willing to sacrifice a friend in order to survive and move to the next level. As social commentary, the series is interesting in that it pits humanitarianism against raw survival. How far would we go if promised a financial answer to all our problems? Without giving too much away, the viewer watches as brains, beauty, strength and heart are pitted against one another. Because so many of us in the Western world live in a cruel, competitive society where bad choices, bad luck or simply human foible can cause personal and economic ruin, it’s understandable why these people participate. We feel their suffering and begin to root for certain players, knowing that their success means the death of another. How far would we be willing to go if crippled by student debt, medical debt or bad luck? Might we also be willing to conjure up our worst and basest instincts in order to survive and compete? Or would we try to change the system?