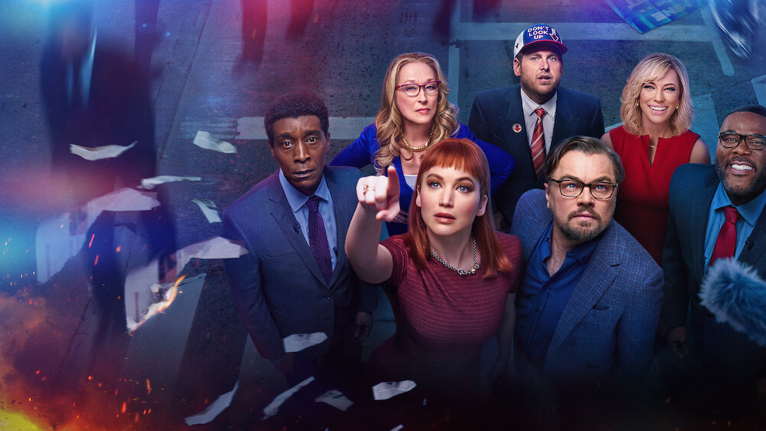 Last year, Squid Game set a new record for hours viewed on Netflix. Whereas traditional cinemas look at box office receipts, on-line streaming services record hours viewed to determine the success of series and movies. Having been streamed for a remarkable 1.65 billion hours, Squid Game is far and away the all-time most watched series on Netflix. Last December, Netflix released Don’t Look Up, a comedy/satire directed by former Saturday Night Live staff writer Adam McKay that became a surprise hit, nearing, in just a month and a half, the streaming record for a feature film currently held by Dwayne Johnson’s Red Notice (Don’t Look Up has already been streamed 360 million hours since its release on December 5). So, what’s all the buzz about?

Don’t Look Up is ostensibly about two astronomers at Michigan State University, faculty member Randall Mindy (Leonardo DiCaprio) and his graduate student Kate Dibiasky (Jennifer Lawrence), who discover a massive meteor headed towards earth and they try to warn the government (and the world) about the impending demise of our planet. The obstacles and hurdles they encounter in trying to warn the government account for the (dark) humor and satire in the film and there are multiple layers to the satire—from the government, to the media, to higher education (no one will take them seriously, since they aren’t Ivy League astronomers and people look down both on Michigan State and Kate the graduate student—who as a female scientist has a second strike against her). But in reality, the film is an allegory for climate change and the catastrophe that awaits us should the world continue dawdling. As a result of the importance of the topic, Director McKay was able to secure a truly A-list cast. Besides DiCaprio and Lawrence (both excellent in their roles), Meryl Streep plays the President of the United States (in a wonderful satire), Jonah Hill, her chief of staff, Cate Blanchett a clueless Fox-like reporter, Timothée Chalamet a young shoplifter, Rob Morgan the head of the Planetary Defense Coordination Office (a real thing, actually) and even Arianne Grande and Kid Cudi make appearances.

As with any comedy/satire, there are times when the film is a bit too over the top. But comedy works in three main ways: clever dialog and puns (think Ted Lasso or Woody Allen), physical comedy (Lucille Ball or the Three Stooges), or satire (Monty Python). The latter often requires exaggeration for comedic effect, so the best satires demonstrate a certain degree of restraint—how much is too much is a question of what any given viewer is willing to tolerate. The film has also been faulted for what some critics see as a faulty allegory. A meteor hit is an imminent event that can be calculated and its impact immediate (it’s something that was not man-made or for which no one can be faulted). Climate change, on the other hand, is a process that has been on-going for many years and can be stopped with political and societal will and, despite what climate-change deniers try to argue, is caused by society and industrialization. But this criticism that the allegory doesn’t really work misses the point that the film tries to make. We have become a society so inured to disaster (and predictions of coming disasters) that it’s hard to get people’s attention and to act. And when institutions do pay attention, too often political or economic concerns take precedence over the human or ecological consequences. On that front, the film succeeds well, for it could also be read as an allegory of COVID, with its the political denials, profit-making schemes, and conspiracy theorists who have popped up along the way. Critics have also commented on the gender roles and stereotypes that the film engages with. Meryl Streep plays the first female president, yet succumbs to many of the sexist stereotypes that people have against powerful women. But one could just as easily read her role as a critique of the corruptibility of any and all leaders, regardless of gender.

But for all it’s faults (which are few, I would argue), in the end, the film is a depressing reflection of our society today. Denial of science, failure of leadership and general ignorance and stupidity in many parts of society abound. As such, final three minutes of the film are very powerful and sobering and worth the entire 2 ½ hours. As Prof Mindy sadly declares at dinner with friends and family, “We really did have everything, didn’t we?”