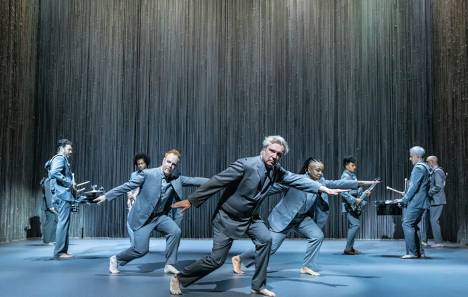 While it was tempting to select a horror film this month in recognition of Halloween, first I’m not a big horror fan and second, 2020 has already been enough of a horror show! Between the pandemic and the presidential elections, most Americans are already feeling quite anxious and, probably, even frightened and thus don’t need recommends for more terror. Instead, I wanted to recommend a project by a great American artist, David Byrne, who since 2016 has been searching for stories to try to find Reasons to be Cheerful. His most recent project, American Utopia, is a collection of songs that seeks to spread that positivity. In order to capture the live performances of the project, he enlisted an unlikely collaborator, another of America’s great artists the filmmaker Spike Lee. In a conversation with Lee about the project and his intentions, Byrne stated emphatically: “The days of just providing entertainment—they’re over. We have an obligation to do more.” And this performance dutifully reflects the obligation he felt to do more, to examine contemporary American society—both the many problems we have as well as some reasons to be joyful—and to encourage people to vote. When one thinks of Byrne’s music as well as that of his former band, Talking Heads, one doesn’t generally think of them as a political band in the vein of U2 or Bruce Springsteen. The Heads, with Byrne at the helm, are rightful remembered as an extremely creative band who stretched musical boundaries and sought to infuse pop music with world beats, offering commentary on American society but rarely addressing contemporary politics head-on.

Spike Lee, on the other hand, is quite rightly associated with political cinema (Do the Right Thing, Malcolm X, Get on the Bus) as his lengthy oeuvre of films will attest. Central to Lee’s films is always the quintessential problem in American society, namely the tension of race. Thus, it perhaps comes as little surprise that Byrne, in seeking to capture his series of Broadway performances, would seek out Lee in order to tackle the politics and tensions of our society today. Byrne is no stranger to controversy when it comes to issues of race and racial sensitivity. In 1984, he made a promotional clip for the concert film Stop Making Sense (itself generally thought of as one of the greatest concert films of all time) in which he dressed up in various costumes and interviewed himself. One of those characters was Byrne in blackface. The clip re-appeared this summer in the wake of the Black Lives Matter protests and Byrne immediately took to Twitter to apologize, saying that he had forgotten about it but was glad that it was brought to light and acknowledged that he too needs to change in how he thinks about race. And the film/performance does not shy away from addressing this as part of a vision of an “American utopia.” One of the most notable performances in the film is a cover of Janelle Monáe’s 2015 protest song Hell You Talmbout, a song about injustice and police brutality towards blacks and African-Americans. Upon the urging of Spike Lee, Byrne and his musicians call out during the performance the names of black Americans killed at the hands of police, shouting “Say his (her) name!” in the manner of so many protests this summer.

But besides the great music (and the film includes a number of classic Talking Heads hits), what makes this a great film? Or, more generally one might ask, what makes for a great concert film? Sometimes it’s that it captures a certain moment in time. Think Martin Scorsese’s The Last Waltz and the final performance of The Band or The Rolling Stones Gimme Shelter and their concert at Altamont. Other times, a great director can deftly move with the camera across the stage and choreograph a film that combines music, theatrics and the up close and personal that we otherwise couldn’t see. Think Jonathan Demme’s Stop Making Sense (the Talking Heads classic concert film) or (again) Scorsese’s Shine a Light or Prince’s Sign ‘o’ the Times. Spike Lee has always been drawn to music (he worked multiple times with Michael Jackson and Public Enemy or his feature film Mo’ Better Blues was a tribute to music) so in this way, he was an appropriate choice to direct them film. The performance took place in Broadway’s Hudson Theater, a theater with a seating capacity of just under 1000. The stage is not large, but Lee’s inventive use of cameras and camera angles captures the spirit, movement and energy of the show. While there may not be a lot of reasons to be cheerful these days, a new David Byrne performance is usually one good reason.