Sunday, October 25th was International Artists Day so we asked our fellow CAHSS professors who their favorite artists were and why.  Keep reading to learn more about their favorites and see if you can find a new favorite!

“Having just read her memoir (Audible version narrated by Mariah herself), I was reminded just how significant her contributions were to popular music in the 90s, 2000s, and still today.  After reading the book, I downloaded some of her hits to reconnect with her music, which inspired me when I was a young singer.”

“I am a great admirer of his work in Documentary Film Making and Visual Arts. His recent documentary Human Flow is a standing document on the global refugee crisis.”

“I have chosen James  Luna – who left us way too soon in 2018.  He was a gifted artist who asked difficult questions, in an accessible way, and was deeply committed to the healing power of art – for himself, first nation people, and the rest of us.”

In this fictitious portrait, Kaphar paints the black slave, Billy Lee (George Washington’s valet) with black tar impasto covering the figure’s face and identity. The image and use of materials powerfully speaks to the absence of black images in the American canon and the inability to depict them accurately. 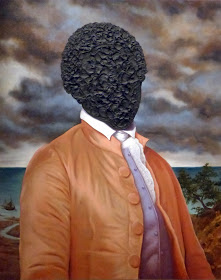 “Edwidge Danticat is a Haitian-American writer who immigrated to the U.S. at age 12. Descended from people who literally died for reading and writing books, Danticat notes her ancestry—and her responsibility: “We create as though each piece of art were a stand-in for a life, a soul, a future…. We have no other choice.”This quote is from Create Dangerously: The Immigrant Artist at Work, an  essay collection.” 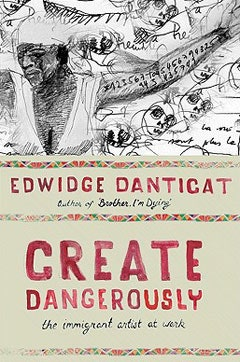 “Among other work, Blankenbuehler choreographed the Broadway musicals In the Heights and Hamilton and often employs pedestrian movement in a fresh and exciting way. His choreography is organically connected to character development and to telling the story of the play through movement.”

“I’d like to submit Michael Rohd, a theatre artist and practitioner of civic practice, which is a marriage of theatre and civic engagement.

He is the Artistic Director of Sojourn Theatre, a 19 year old theater company, as well as the founding artist of the Center for Performance and Civic Practice.”

Artsy says, “In her best-known works, Oppenheim…created haunting assemblages of indeterminate origins, often transforming objects closely associated with feminine domesticity into erotic symbols. Object (1936), a fur-covered cup, saucer, and spoon, became her most iconic work.” Object is widely considered THE surrealist object, and was inspired by some jewelry Oppenheim had designed for the fashion house, Schiaparelli. The surrealists as a group were notoriously sexist, and after gaining entrée to their circle as a model, Oppenheim served as a kind of muse until she broke with the group in 1937. She continued to make work until 1966. The use of clothing and textiles in her assemblages was unique and personal, blurring the lines between “decorative” and “high Art” in a way that feels both feminine and feminist, remaining relevant today.

Justine Kurland is a contemporary photographer, well known for her first body of work, Girl Pictures (1997-2002), a series of photos that reimagines American mythology and the American Dream by re-centering its tropes on the experiences of teenage girls. Kurland’s work reminds me of the importance of questioning our mythologies and of all the stories that are obscured by the canon of cultural narrative.

“I’d like to submit one of my heroes, actor, playwright and Goodwill Ambassador for UNICEF, Sarah Jones. Through her writing and virtuosic shapeshifting, she raises awareness of ethnic, racial and economic disparities with humor and heart. She has won all of the fancy awards, but for me, she embodies the transformational power of theatre to both inspire and crack open a deeper understanding of ourselves and our neighbors.”

Sarah Kane (Playwright – 2/3/1971-2/20/1999) – English born playwright whose short life generated a body of work that is visceral, deeply psychological & psyche focused.  Her language-based approach to playwriting and her ability to defy a causal/linear structure completely blew apart my youthful understandings of what plays can do and accomplish.

“My selection for International Artists Day is the performing duo Transient Canvas. Bass clarinetist Amy Advocat and marimbist Matt Sharrock are incredibly skilled and sensitive musicians, and their duo is committed to sharing the work of a diverse array of living composers. They’ve also done a remarkable job of reaching out to audiences during the pandemic through livestreamed, interactive performances!”

British novelist, travel writer, and playwright Caryl Phillips, the child of Black British immigrants of the “Windrush Generation,” employs postmodern yet accessible storytelling to explore Britain, Europe, and the transatlantic world’s histories of migration, tribalism, intercultural contact, and national mythmaking. In the US today, his work, including THE LOST CHILD, THE NATURE OF BLOOD, and THE EUROPEAN TRIBE, communicate empathy, epiphany, and dire warnings.

“Offill writes unconventional “novels of ideas” that contemplate big human questions with dry humor and focuses on answering those questions in the intimacy of small moments.”

We got so many great submissions for International Artists Day. Who is your favorite?