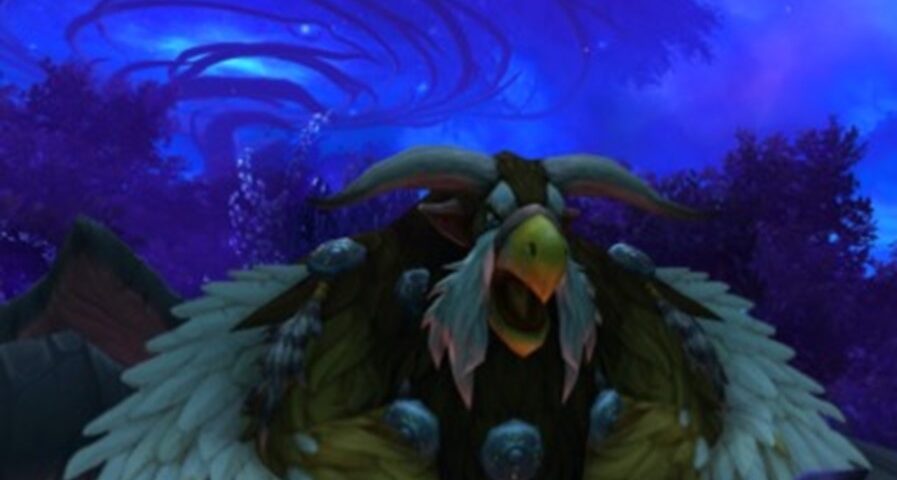 Surprise! You may have opened this article expecting to find Bryan Carr, but you’ve clicked on the title to find me instead. This isn’t an experience uncommon to gaming. For most of us, when we boot up our consoles, fill out our RPG character sheets, or build our initial settlements on the isle of Catan, part of what we are doing is stepping into a perspective, a mindset, taking stock of our resources and goals and imagining who we are among them. This pretense is one of the great joys of gaming, but it’s also the basis for some of its most toxic encounters and debates. How do we react when a game expects us to be someone different from who we are? How do these avatars shape how we see ourselves? What happens when the mask slips, and you realize the person behind the pixels isn’t who you thought they were at all?

I’ve been playing WoW (released in 2004) off-and-on since 2009, which makes me a fairly casual player. When I started playing seriously again in 2019, it was partially to keep in touch with distant friends, but also as a way to reconnect with the game, which is central to the novel I’ve been working on—one where a game ends, and players are left reeling in the sudden loss of the digital fantasy world they’ve come to rely on. Many WoW players have a wary relationship with the game, which can be addictive and time-consuming, but most of us light up when given the chance to talk about it. We’ll go into lengthy stories about working with guildmates to kill difficult bosses, about our friends—many of whom we know only by the names of their avatars—the raid mechanics and questing zones we most enjoyed, about the twists in the story that shocked us, the in-game memories we will never forget. WoW is a complex and long-standing game, but at its heart, it is a game about social connections and community. It is about the thrill of working with others to accomplish things you would never be able to alone.

As a social environment that encourages random interactions with strangers, WoW can be toxic.  When I returned to playing more seriously, it was partially because I stumbled into a raid group that I liked, and partially because of the pandemic, which made it difficult to spend time with people in-person. Because of the social requirements of the game, WoW has in-game mechanisms that help players to find others interested in pursuing similar game goals. But most players rely on Discord communities, where it’s easy to communicate via text, audio, and video. This is crucial because raids or other long-term game goals can take weeks or months of regular practice. What this means is that, as a player, I often find myself in lengthy audio calls with twenty strangers, and until they begin speaking into their microphones, I have no idea who they are.

Like most women, I have ingrained rules that I follow to stay (mostly) safe in the world. I avoid dark areas, text my whereabouts to friends, pay close attention to the people in my vicinity. In the game world, I look for groups with multiple women, ideally in leadership positions. I look for queer-friendly spaces, and players who are willing to speak up against off-color jokes or harassment. Online spaces are strange in that it can be difficult to know where you are until you’re in the middle of someplace dangerous. Having players you trust around you is crucial. Many raid groups, including mine, require players to agree to an anti-bullying and harassment statement before they can even view the main Discord channels. Our group is full of people from a variety of geographical locations, players of all ages, genders, and sexual identities, including parents, couples, teenagers. I don’t know any of their real names, and they don’t know mine. But during the power failures last winter, the guild leaders offered to run a funding campaign to send things like blankets and generators to players in Texas, and after the allegations against Activision Blizzard came out over the summer, some of the first posts were donation links to non-profits who teach coding to women and people of color.

The first night I raided with them, I stepped as a moonkin into the room with the giant gargoyle boss, and I slipped on my headset to find myself in the middle of a discussion about the differences between kink and heteronormative ideas about gender. Yes, I thought. We’re going to fight Shriekwing while also dismantling gender and sexual normativity. These were my people. I’d found a strange kind of home.

The charges being brought against Activision Blizzard by the state of California are extensive and stunning, ranging from charges of fostering a misogynistic workplace environment with unequal pay and gendered working conditions, to mistreatment of trans and LGBTQ workers, and rampant sexual harassment. Specifically, the charges mention “cubicle crawls” where female employees were regularly groped, and the horrible “Cosby Suite,” which was a well-known nickname for a hotel room for executives at Blizzcon. At its most basic, the lawsuit against Activision Blizzard reveals a culture where women were treated as lesser, disposable objects, and where this perspective was acceptable enough for executives to pose with a framed photo of convicted rapist Bill Cosby, all of them smiling, as if this were something to celebrate.

Barely a week after the lawsuit went public, most of my raid group had unsubscribed from the game. Many of them wrote heartfelt tributes on Discord, describing what the game had meant to them, the friends they’d made, the accomplishments they’d never forget. It was clear from these testimonials that WoW was more than a game. It had helped players navigate the challenges of growing up, had helped people weather difficult periods of illness, disability, loneliness, and unemployment. Many talked about their joy at finding our specific raid group, at finding a place where it was safe to be a woman, or queer, or even (gasp) an average player. The sometimes-toxicity of the game world had led us to this oasis, and the safety of that place had helped us navigate the larger sometimes-toxicity of the physical world. As our raid group dwindled, and I searched for other options, I found community after community where the same thing was happening. Players were reeling at the sudden loss of their friends and teammates, while also trying to reconcile their own choices. How do you continue to support a company that has been openly hostile to people like you? How do you walk away if that means abandoning the women, queer folks, and people of color who continue to work there, who have put their livelihoods on the line and are fighting daily to make the company better? And how do you walk away from a world that has shaped you, away from a specific digital version of yourself that can’t exist anywhere else?

If you follow the news about the lawsuit against Activision Blizzard, you’ll find a variety of perspectives: Players who have left and will never go back, insisting that no change will ever be enough; Cynical players who have largely ignored the controversy, arguing that all game companies harbor similar misogyny; Players who are taking a break, hoping conditions will improve; And lost players, like me and the characters in my in-progress novel, wandering the strangely-empty digital cities, trying to make sense of what’s vanished, and wondering whether it existed in the first place. Without the lawsuit, most of us would still be playing, none the wiser. Because how can you know, as a gamer, what life is like inside the companies you support? Will we be able to see it in the game when things have changed? If not, who will we trust to tell us?

No matter how well I know the bosses in the raid, the mechanics of the encounters, the layout of the castle, or the intricacies of my spell rotation, there’s often something that I don’t know. Every time I join a group of strangers, there’s that moment when I first enter the voice chat, when I say hello in a voice that probably belongs to a woman. The silence that follows is terrifying, no matter how short it is, as I wait to learn what kind of players they are, and to understand how they will treat players like me. It’s likely that they’re trying to figure me out too, this unfamiliar person who is suddenly in their midst. I’m not sure this kind of thing happens elsewhere, outside of gaming. Over our headsets, maybe we’ll talk about who we are and what we think, about what is happening in our various corners of the world. Probably we’ll put down a feast and share digital food together. We’ll discuss strategy, and then we’ll destroy the Tarragrue. In truth, he’s all hulk and bluster, really no match for us at all.

Julialicia Case is an Assistant Professor of the Humanities and English at the University of Wisconsin – Green Bay, where she teaches courses in fiction, game writing, and digital media, and is a co-director of the UWGB Center for Games and Interactive Media. You can learn more about her writing and scholarship at www.julialiciacase.com.