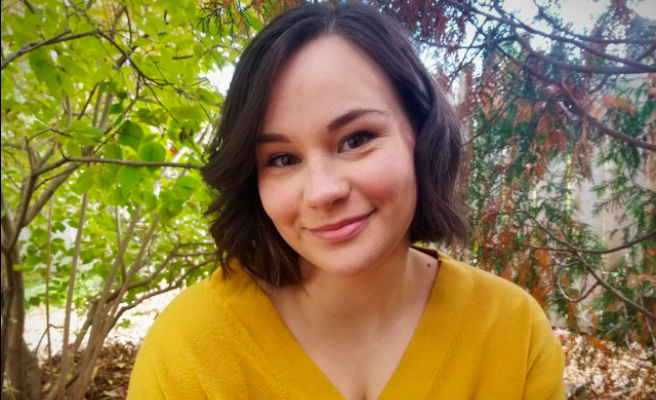 Guin Casper graduated in December 2019 with a double major in Theatre (Musical Theatre) and English (Creative Writing). She is now working as an actor with Kohl’s Wild Theater, a program from the Zoological Society of Milwaukee in partnership with Kohl’s. Kohl’s Wild Theatre produces original plays and musicals to help teach children and families about the environment, conservation, and animals through drama, music, and puppetry.

Why did you decide to major in Theatre (Musical Theatre) and English (Creative Writing)? I decided to be an English major before arriving at UWGB because I loved writing and analysis and had originally hoped to become a writer or an English teacher. During my freshman year, I became involved in the Theatre department at UWGB through the influence of a few friends and that’s where I ended up really finding my home. I had always loved theatre, but hadn’t considered it as a major until the end of my freshman year. Now I can’t believe I ever thought I would be doing anything else. Ultimately, my two majors are very similar in so many ways; I felt a calling to tell stories and analyze how we interact with the world, and I can do that as a writer and as an actor.

What academic experience or accomplishment are you most proud of? During my junior year, I was fortunate to have been accepted into the Open Jar Institute in New York and was able to travel to the city and train with Broadway professionals for a week that summer, which wouldn’t have been possible without the training I received at UWGB. But what I’m proudest of, really, is the way I was able to grow during my time in undergrad. I was cast in a production (or two) every semester, was able to collaborate with and mentor other student actors, and worked on some really amazing projects that helped me to better understand who I am, both as a professional and as a human being.

What is an important goal or accomplishment you are currently working on? Right now I’m working on setting up my home base in Milwaukee. I graduated shortly before the COVID-19 pandemic hit the U.S., so I’ve been in the process of not only adjusting to what the new normal is in the theatre industry, but also just settling into the professional world in general. It’s no secret that the arts community was and is seriously impacted by COVID-19 and as we figure out how to still make art during a pandemic, I’ve been proud to be working to help find ways for myself and other artists to still work and practice our craft.

What do you do for fun? I like hiking, podcasts, and fanfiction (both reading it and writing it). I also love watching and exploring ASMR and am thinking about starting a Youtube channel dedicated to it.

What else do you want people to know about you? Young Adult fiction and nonfiction are my favorite genres to read and write because I think that they explore humanity in its most vulnerable and truest period of life.