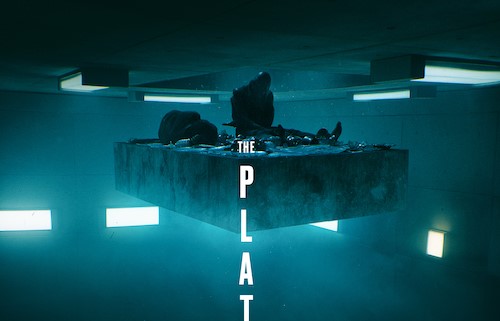 When the COVID pandemic comes to an end and societies begin to open up to try to return to normal, what lessons will we have learned? For every country, these lessons might be slightly different but one thing the pandemic has painfully revealed globally is the high degree of social and economic inequality. A New York Times article in early March noted:

In societies where the virus hits, it is deepening the consequences of inequality, pushing many of the burdens onto the losers of today’s polarized economies and labor markets. Research suggests that those in lower economic strata are likelier to catch the disease. They are also likelier to die from it. And, even for those who remain healthy, they are likelier to suffer loss of income or health care as a result of quarantines and other measures, potentially on a sweeping scale.

The Spanish-language film The Platform (now streaming on Netflix) is what Forbes has called “the perfect parable for a pandemic,” in that it is a parable of the evils of greed and wealth inequality in social isolation. The film, a sci-fi horror/thriller, opens with a scene in the kitchen of a high-end restaurant, where gourmet meals are being prepared. We soon learn that this food is placed on a platform that descends from one level to the next in a hellish sort of prison. The two inhabitants on each floor have about a minute each day to take and eat what they can. Those at the top have access to an abundance of food: caviar, meats, fresh fruits, wine. and gourmet dishes. By the time the platform reaches the bottom (and there appear to be over two hundred floors), the inhabitants are starving with only scraps or next to nothing left to eat. The catch is, about once a month, everyone is anesthetized and wakes up on a different floor—some moving up, others descending further into hell, an obvious reference to the precarity that we all live in, in a neo-liberal capitalist system.

It’s unclear why people are in the tower, but each person is allowed to bring one object with them. While some bring knives or weapons for self-defense, Goreng, the protagonist, is an idealist who opts to bring a copy of the Spanish literary classic Don Quixote, another subtle reference on the director’s part to the brutality of a capitalist system that has lost its humanistic values. Goreng sees the pain and suffering of those below and wants to change the system. If they all only took what they needed, he tries to argue, there would be enough for everyone (again, a reference to overconsumption in wealthy countries and the failure to share and distribute resources and food more equitably). He tries to convey this message to those above and below him, but soon realizes that while he might be able to influence those below him, he has little leverage on those above, for whom greed tops fairness. While the film was made in 2019, the behavior of the tower dwellers echoes behavior we have seen during this pandemic—from hoarding of toilet paper, masks and disinfectants to Spring Breakers in Florida oblivious to the consequences of their actions on others. Humans, so the film tells us—and sadly reality has too often confirmed—can be selfish and care only about themselves in the race for survival.

Some critics have argued that The Platform’s metaphor for socialism and its critic of greed and capitalism are a bit too simplistic. But the director’s stance is quite clear: the film is tense, dark and very violent (and thus not for all tastes, so to speak), much like our society in many ways. Nevertheless, it is also not without hope. The end of the film is left open and is somewhat ambiguous, causing critics and fans of the film (it was one of Netflix’s top streaming films in April) to debate the final message. While some feel that Goreng’s quest to change the system is a quixotic folly, others have read a sign of hope into the film’s ending. Either way for fans of horror films and thrillers with a social message, The Platform is an engaging parable for our times.