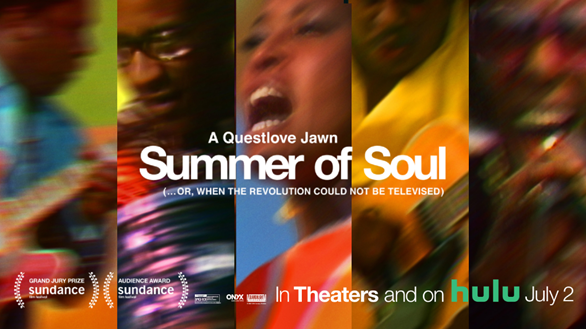 When you think of iconic music festivals, what are the first ones that comes to mind? Depending on your age it might be Lollapalooza or, if you are a bit older maybe Woodstock. There have been many classic musical festivals over the years, but very few people have ever heard of the 1969 Harlem Cultural Festival—sometimes called the “Black Woodstock”—that took place the same year as the eponymous festival 100 miles to the west. In fact, when Questlove (The Roots drummer and Jimmy Fallon’s house band leader on the Tonight Show) first heard about it, he wasn’t even sure if it actually happened. He had heard about this event and the impressive line-up of black artists who were said to have performed, but there was little he could find about it. Then Hal Tulchin, one of the organizers of the festival, contacted him saying that he had 40+ hours of film recordings documenting the festival that had never been seen and that had been stored in his basement for the past 50 years. Tulchin could never find a studio or production company interested in the topic, despite the fact that the festival featured some of the top names in soul, gospel, rhythm and blues, jazz and funk. The month-long festival, which was attended by over 300,000 people, was a watershed moment for black leaders and musicians, but the (overwhelmingly white) culture industry had shown little interest. Questlove set about editing the footage, finding people who had attended and performed and created Summer of Soul, the award-winning film which is now streaming for free on Hulu.

While 1968 became known as the summer of love on the West coast, things had taken a darker turn by the following year. Martin Luther King, Jr, John F and Bobby Kennedy and Malcolm X had all been assassinated and despite the passing of the Civil Rights Act, social unrest continued. Haarlem was a focal point for protest and organizing in the black (and Hispanic) communities, as we learn in the film so a cultural and musical festival could help bring people together the organizers thought and potentially defuse some of the tension. And this was exactly the goal they had. With the support of then Mayor of New York City along with black leaders (including the Rev Jesse Jackson), Tulchin and Tony Lawrence, a singer and empresario, gathered together many of the top names in black music (and as the film tells us, this was a turning point in the use of the term “black” as a means of empowerment): Stevie Wonder, Gladys Knight, the 5th Dimension, B.B. King, Nina Simone, Sly and the Family Stone, Mahalia Jackson, Max Roach and many others.

While the performances are excellent (and the film and sound quality amazingly good after sitting so long in a basement) the film is more than just a musical documentary. It’s also a portrait and exploration of a particular political and social moment in our history; one that would be a turning point, in many ways, but one that also has marked parallels to our current one, in the wake of the George Floyd murder and the subsequent protests. And the film is truly remarkable for a number of reasons: first for what it says about the culture industry that no studio has been interested in this topic or the material for decades. Second that the footage is still in such good condition after a half century of neglect. And third, the fact that it was filmed with such high standards and that it attracted such top name acts shows that this was a festival on par with Woodstock and deserves to be remembered in the same discussions of festivals that shaped our collective history. And of course, it’s full of some great music.