Have you ever seen movies such as Marvel’s Avengers or DC Universe Justice League? They are based on comic books written by Stan Lee (Marvel) and Malcolm Wheeler-Nicholson (DC Universe). Novels and the Strand Magazines stories from Sir Arthur Conan Doyle, creator of the famous Sherlock Holmes, are adapted into anime and manga series by artists and production studios. Transmedia narratives are stories that extending to many versions across multiple media types. The Sherlock Holmes transmedia universe broadens the scope of the original Holmes universe fans and entices new fans.

Many know Sherlock Holmes’s name but not his origin. Sherlock Holmes is a brilliant fictional detective of Sir Arthur Conan Doyle’s creation set in the Victorian and Edwardian Eras (late 1800s-early 1900s). Holmes is known for his deduction and observation skills when solving crimes and mysteries as a consulting detective. Doyle pairs him with Dr. John Watson, a medical doctor formerly of the British Army, Holmes’s detective partner, best friend, and narrator of his adventures. The pair creates a blend of quirky and complex personalities compelling the readers. Watson is Holmes’s peacemaker and confidant. Once this dynamic duo’s relationship develops, it leads Watson to save Holmes from trouble multiple times.

Anime and manga have lately become increasingly popular among American audiences, but what exactly is anime and manga? In essence manga (“Maang-guh”) in Japan is like comic books for the United States. While comic books read from left-to-right manga, typically, reads from right-to-left. Traditionally, manga is often printed and drawn in black and white unless colored for special editions in a series – this keeps the cost of production down to mass-produce volumes more effectively and efficiently.

On the other hand, anime (“ah-knee-may”) to Japan is like cartoons to the United States. Big-name companies such as Netflix and Hulu have been broadening their licensing services to include anime on their platforms catering to the growing American anime audiences. In terms of content anime and manga tend to be more liberal delving into complicated plot structures of romance, revenge, adventures. Just as we see books turned into movies, there are times when books, or games, are turned into manga or anime and vice versa. Sherlock Holmes has been one of many sources over the years to either inspire complete adaptations or give creators the freedom to play with ideas and aspects of Holmes’s adventures into their own creations.

Holmes has been adapted into movies, TV shows, comics, and games, However, we do not hear much about other adaptations that are created outside of western culture. Such adaptations’ popularity continues to grow, especially in Japan in the form of anime and manga. In 2010, BBC released Sherlock, a British crime television series based on Doyle’s stories. Later, in 2012 a manga adaption of the BBC show was created and published by Young Ace, a monthly seinen (youth) manga magazine in Japan published by Kadokawa Shoten. More recently, the manga series “Moriarty the Patriot” has been adapted into an anime series that is a prequel to Holmes and Watson’s storyline. This adaptation takes a different approach, following Holmes’s canonical antagonist, Professor James Moriarty, and his brothers, exploring how he became the first and only “criminal consultant”. Kabukichou Sherlock (Case File no221: Kabukicho), airing from 2019 to 2020, is another adaptation of Doyle’s work. In this adaption, we see Doyle’s original character set in modern Japan, where Holmes and Watson solve a string of serial murders committed by Jack the Ripper. Anyone who finds themselves to be a fan of Studio Ghibli (Japanese movie studio, famous for the films Spirited Away and My Neighbor Totoro) also created a Sherlock Holmes adaptation in 1984. Meitantei Holmes (Sherlock Hound) was directed by Hayao Miyazaki (a founder of Studio Ghibli) and is loosely based on the original Holmes’s stories, however, almost all of the characters have been redesigned as anthropomorphic dogs. Compared to Doyle’s version of Holmes, Miyazaki tones down his adaptation into a kid friendly introduction to Sherlock Holmes void of Holmes’s usual bad habits. 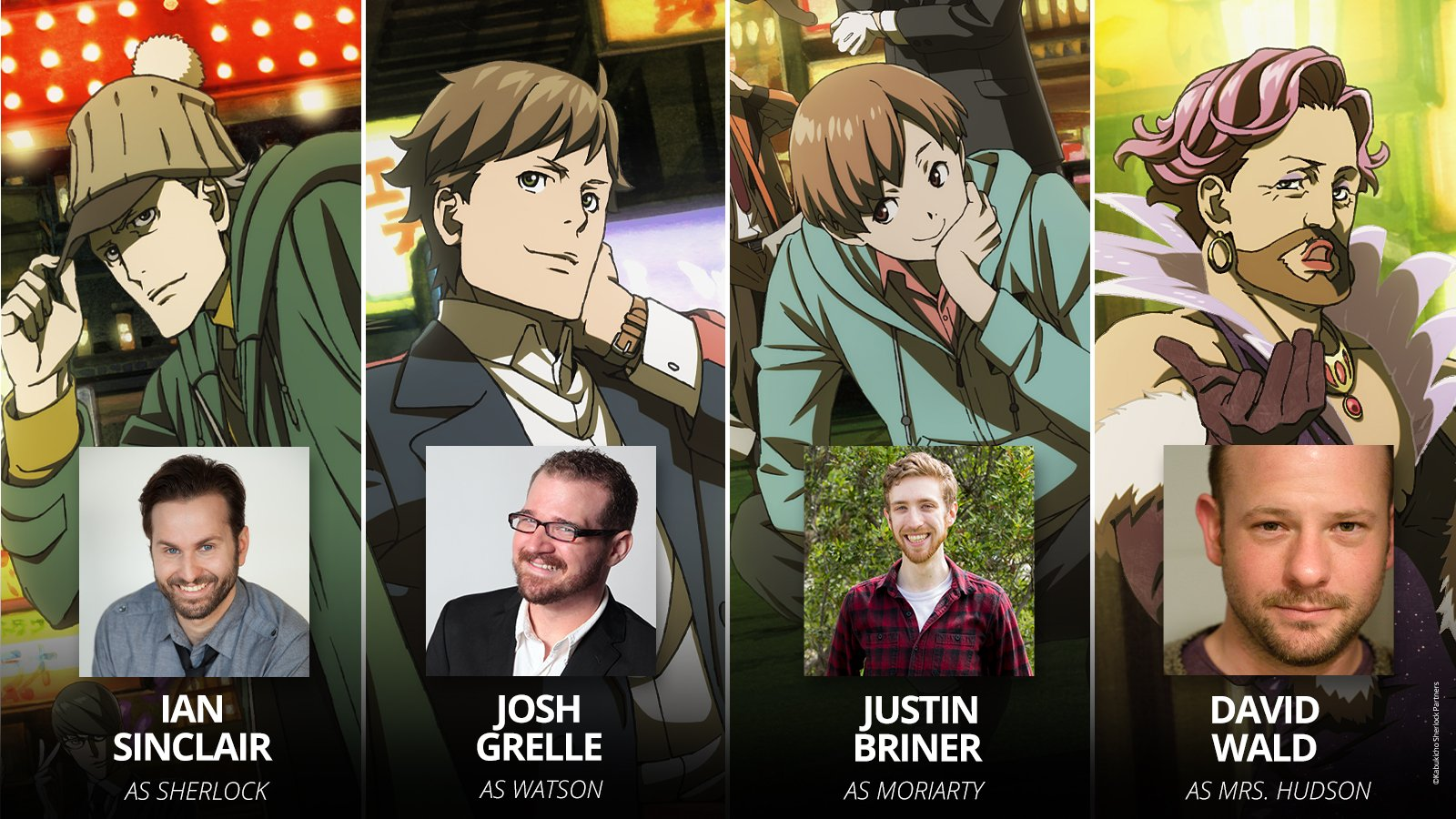 Case of no221: Kabukicho- dubbed versions. This is the anime that is set in modern Japan.

This article was written by Kaitlyn Pichette and Aaron Vang.